A Squirrel vs. A Car, A Sad But True Story

I had my day laid out like this for today:

1.  Go feed the parrots that I'm sitting for this week
2.  Go get coffee
3.  Go to the grocery store
4.  Go to the flea Market searching for abused silverware
5.  Home to write this week's blog posts
6.  Work on pet toys to donate to 1 Day Ranch for animals displaced by the Shawnee, OK tornadoes.
7.  Go to the Gym

In reality, I only checked off number 1 on my list by noon time today!  You see, as I was about to round the last corner before Starbucks when I saw a squirrel in the road.  As I moved more to the center of the road to avoid hitting him, I realized that he wasn't able to move his back legs and was desperately trying to drag himself to the side of the road.  Sadly, he could do nothing more than spin himself around in circles.  I watched the cars behind me drive passed him as I rounded the corner and then turned myself  around.

Ugh!  Now what?  Lucky for me, Lowe's is directly across the street from the Starbucks that I was heading for and they had just dispatched a delivery truck with two fine gentlemen who were headed in my direction.  THEY were the only ones to stop and see if everything was okay.  As I started to say, "yeah, yeah, thanks for asking,"  I realized they probably had what I needed in the truck.  Turns out they were willing to part with a big ole Lowe's blanket and had gloves in the truck, mind you they weren't leather but it was something to protect my fingers from those painful rodent teeth.  Not only did they have what I needed, they picked up the squirrel and helped me wrap him up.

So, feisty squirrel wrapped up in the car and I'm headed to the emergency vet secretly wishing that when I get there they'll reward my bravery with free vet care that will save this little guy.  Although, my realistic side knows better than that, but a girl can dream right?  As I'm driving to the vet who is about 15 minutes away I'm thinking about what just happened and realize that I didn't properly thank these two Lowe's employees who went way above and beyond the call of duty, so I called the store.  I didn't even know their names.  Now I know that I can thank Ken and Blake from the Greer, SC Lowe's Store!  Thanks guys, really!  You knew the fate of this little tiny creature and yet you stopped to help anyway.  Your compassion is something to be admired.

Sadly, our squirrel passed away on the way to the vet.  But at least he was in a quiet and calm setting rather than stressing out on the side of the road.  No living creature deserves to die like that.

Do you have your local rescue on speed dial? No?  Now would be a great time to do a little research and find the folks closest to you who can handle animal emergencies such as this one.  It might take a few moments or even a few hours of your day, but don't the animals that we share the planet with deserve that?  With all of our fancy houses and lawns stealing habitat from them and our fast cars running into them constantly, isn't it the least we can do?  And now, I'll step down from my soapbox and let you ponder the message.

It's a Toy Drive - for Animals in Oklahoma

Doesn't it seem like Mother Nature's just kicking us in the pants lately?  All these super storms and tornadoes come sweeping through the country and displace thousands of people...and their pets.  If you remember when the levees broke in New Orleans during Hurricane Katrina, so many people refused to vacate their homes because they didn't want to leave their pets behind and shelters were refusing to take them.  Thankfully, we learned a thing or two from that experience and shelters stepped up their game by the time Sandy hit.

But what about for the long term?  Some animals need to stay in shelters for extended periods of time, separated from their human families and surrounded by strangers.  A few weeks after Hurricane Sandy hit New England a fabulous team of animal lovers from Etsy, aptly named Etsy For Animals started crafting all sorts of toys and what-nots for animals in that very situation.  Remember my stash?  Well, we're at it again.  And here is where I ask for your help! 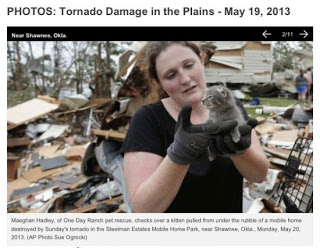 There are a couple of ways you can help out:

1. Please read about how Etsy Artists are helping a fabulous rescue called 1 Day Ranch and then shop 'til you drop in the shops who are donating a portion of their sales to this organization.  But hurry, the team chooses another well deserving animal charity in July.

2. Check out 1 Day Ranch's wishlist and donate if you can.  And be sure to follow @Maeghan on Twitter for updates on the rescue efforts.

3.  Support the Upcycled Stuff Toy Drive for 1 Day Ranch.  During the month of June, I will donate 2 toys for every one purchased through my Etsy shop or at a Farmer's Market. You can choose to have the toy sent to your home for your pet to enjoy or you can ask that I send it along to animals displaced by the tornadoes.  If you're donating your toy, please use the Coupon Code TOYDRIVE at Checkout to avoid paying for shipping (I will ship one large package).  Please use the following shipping address; 1 Day Ranch, 16704 Bethel Road - Shawnee, Oklahoma 74801


Toys in the shop include:

If you are unable to donate, that's okay, you can still help out.  Please tweet and share this post so that others can learn of ways they can help.  Thanks for helping me help our furry little family members!
7 comments:

Are you ready for another Mother's Day Patio Makeover Project?  I sure hope so, only two more after this one.  So today, it's an  upcycled lighting parts bird bath: 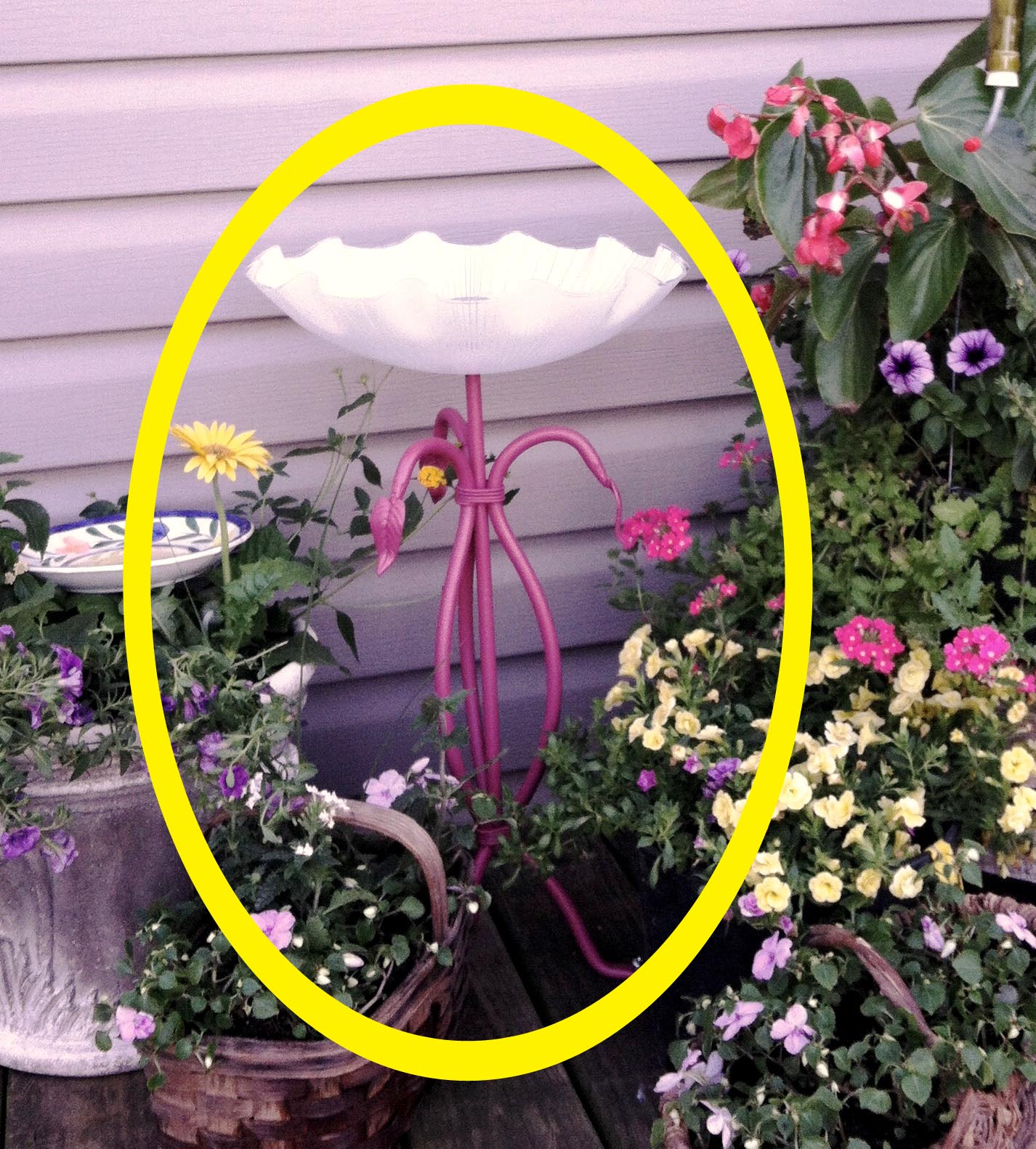 I love this bird bath!  It reminds me of one of those fancy tulips. If you decide to upcycle yourself one of these bad boys, keep in mind that every piece is going to be different.  The way you attach things is going to be different.  You're going to have to wing it some of the time.  Let me show you how I did mine.  Er, tell you most of the time.  I wasn't very good about taking pictures for this one.

First, the basics.  You'll need an old or thrifted lamp base, some kind of bowl shaped object with a hole in the center (or be willing to drill one) and you'll need some silicone for sealing around the hole to make sure the water stays in.  Optionally, you may want to use some spray paint - I did!  And you may want to add some kind of embellishment to the center of the bowl to hide the silicone blob - I did!

To get started rip your lamp apart, if you're good with wiring lights then hang on to those parts and reuse them in another project.  Paint your lamp base if desired.  Mine was a pretty simple black base with a golden faux sponge finish.  It was pretty yucky, so I pulled out the bright pink spray paint and coated the entire lamp base a couple of times.

Before you attach the bowl consider where your bath will be? Is the bowl in danger of breaking easily?  My bowl is actually a ceiling light cover and is very fragile so I pulled out my drill and drilled a hole in each of the feet.  Make the holes large enough to accommodate a very long carriage bolt if it is to be "attached" to softer earth or screws if it will be screwed into a deck, like mine. 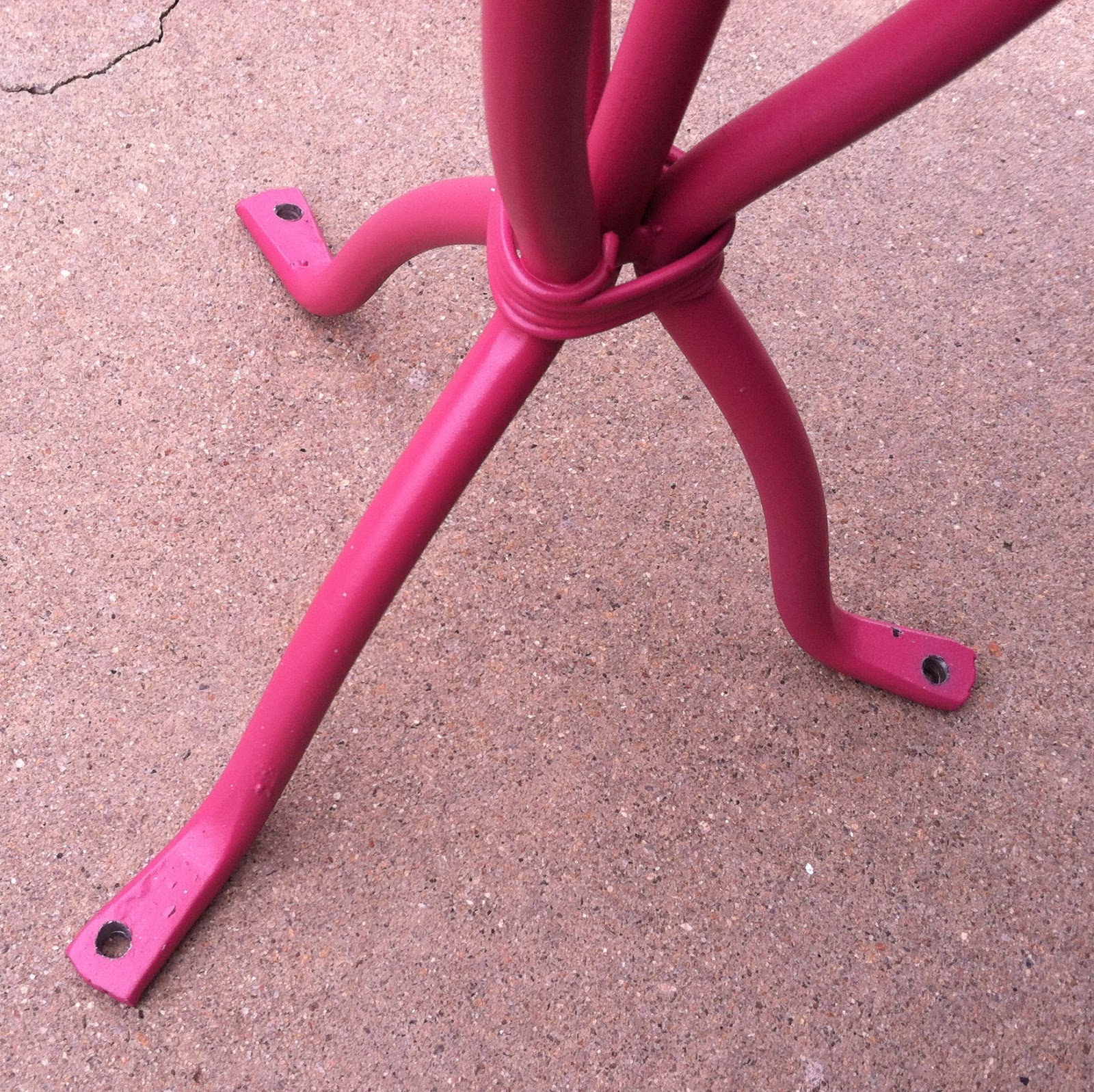 With that done, time to attach the bowl. When you pulled your lamp apart you should have been left with a threaded bit of rod at the top.  This is where you'll attach your bowl.  I didn't want it to snap when the glass hit the threaded rod so I slid on a rubber washer in just the right size to wiggle in between the two pieces, protecting the glass from shattering. Then I added a nut to the threaded rod to keep everything in place. 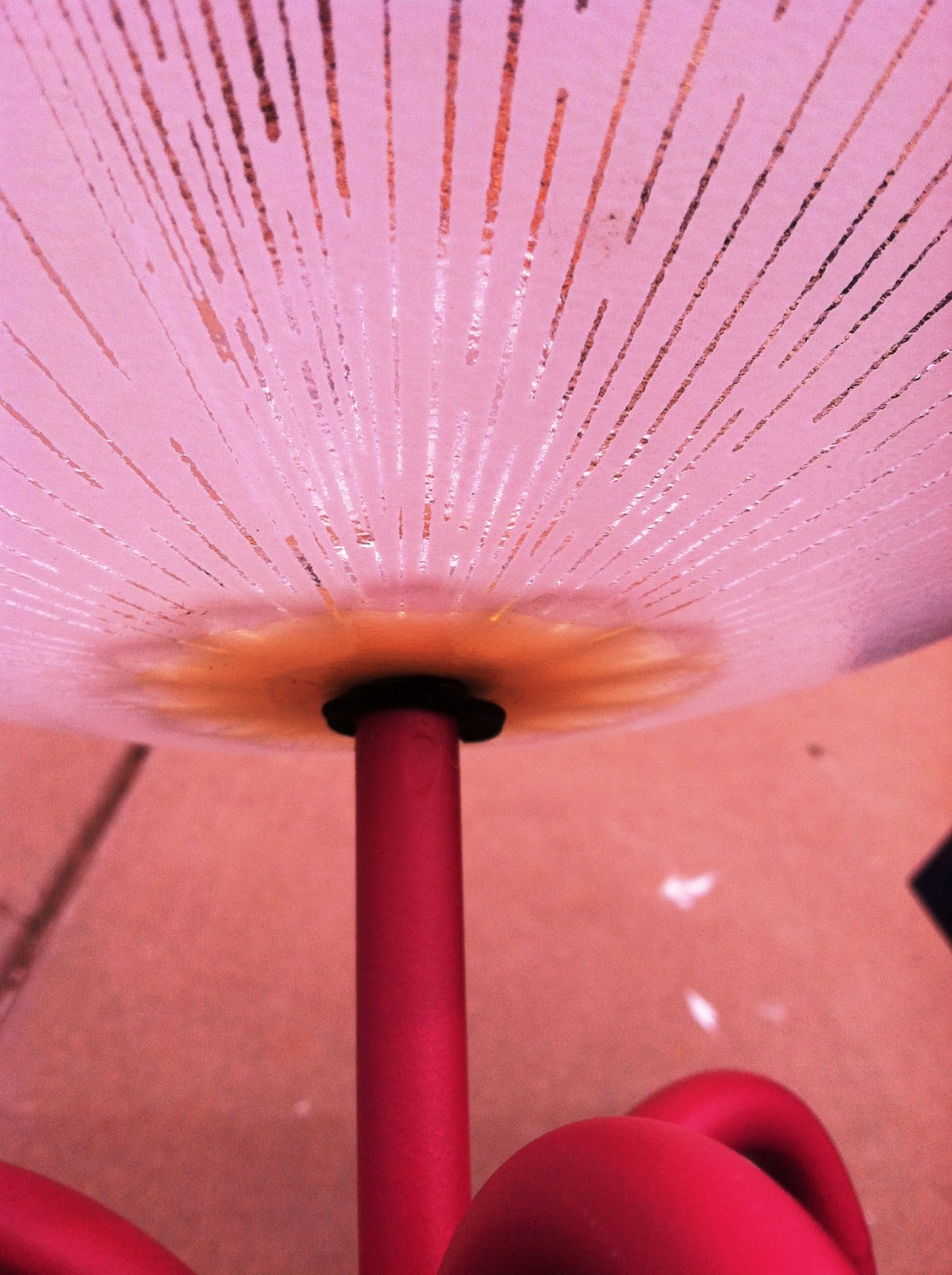 To make sure there was no leaking I added a blob of silicone (this is my favorite adhesive!) to the threaded rod and nut.  You can imagine it was pretty ugly so added more silicone and then took a clear votive holder and flipped it upside down on top of the blob.  Perfect!  Let that cure for a minimum of three hours and you're ready to bust out the bubble bath for the birds.